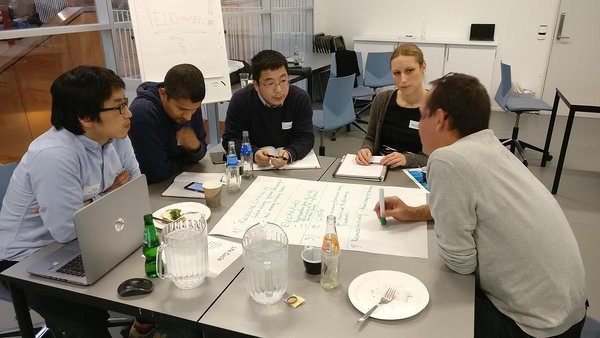 Late December 2017 South Denmark European Office (SDEO) and TEK Innovation at the University of Southern Denmark (SDU) organised two workshops to strengthen the cooperation between researchers and companies within the business areas clean-tech and robotics. The workshop concept as well as the learning from the interactive sessions between companies and researchers feeds into the EmpInno project as a good practice on how to “Engage and Motivate Small and Medium Sized Enterprises in Research and Innovation activities within the regional S3 framework”.

Prior to the two workshops SDEO had collected innovation ideas and challenges from the interested companies. On that basis TEK Innovation identified and engaged relevant researchers at the University of Southern Denmark. This meant that during the actual workshops the exchange between companies and research was very focused and concrete.

EU-consultant Erik Björklund from SDEO, one of the organizers of the two workshops, says:

Claus Amtrup Andersen from EURISCO, a company working with software development for energy systems based in Odense, participated in one of the workshops that according to him was a positive experience.

“The preceding work from the organizer to make relevant matchmaking between the participants was really good. The group I was in consisted of participant within the field of energy. That meant that it was easier and faster to find a case and to complement each other within the interest areas for both the academic world and the companies involved. The workshop was well prepared and relevant methods were used to facilitate and visualize the process” says Claus Amtrup Andersen.

On the outcome of the workshops, Eric Björklund from SDEO stresses:

“The feedback from both researchers and companies has been very positive. Eight concrete innovation project ideas were the direct outcome of the workshops and an agreement to continue cooperation on project development on an even more focused one-on-one basis. On top both TEK Innovation and we at the South Denmark European Office will work to help find funding to realise the innovation projects”.