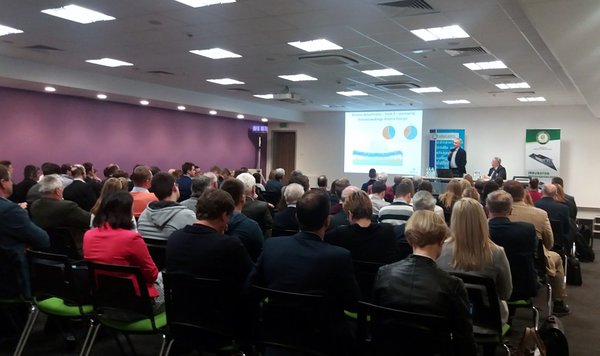 On 15th November 2017 during the 10th Lublin Fair for Energetics ENERGETICS 2017 (Poland) an international conference "Energy independence at the local level" was held in Lublin. The conference was organised by the Foundation for Lubelskie Development – the coordinator of the Lublin Eco-Energy Cluster in cooperation with EmpInno partners. At the event 110 people participated, including entrepreneurs, representatives of regional government, universities, research and development units as well as students. The participants became familiar, among others, with the idea of creating and developing energy clusters; the role of renewable energy sources in achieving energy independence at the local level; developing cooperation between different environments for achieving energy independence of communities and poviats, as well as technologies and innovations in the field of energy production and distribution management at the local level. During the conference Sinnika Mynttinen from the South- Eastern Finland University of Applied Sciences, Small Business Center, presented Finnish experiences in developing cooperation between farmers and scientists to produce energy on local level. Dr Vytautas Šiožinys, UAB Energy Advice from Lithuania, presented the Renewable Energy Integration project, based on innovative IT solutions. Integral part of the conference were cooperative meetings (B2B) with the participation of Polish, Finnish and Lithuanian enterprises and institutions. The matchmaking events/meetings were organised by the Foundation for Lubelskie Development in cooperation with the Enterprise Europe Network Office managed by the Lublin University of Technology, Kaunas Science and Technology Park from Lithuania and the Regional Council of South Ostrobothnia from Finland. Twelve representatives of enterprises and institutions held fifteen B2B meetings during which they got to know each other and discussed possibilities of future cooperation.

Moreover, on 14th of November 2017 in Lublin (Poland), an "Energy round table" was organised by the Foundation for Lubelskie Development as part of the EmpInno Project. The main objective of the round table was to discuss the tools and methods of implementing smart specialisation strategies (RIS3) in the partner regions of the EmpInno project, as well as to identify the main problems in cooperation between research units and entrepreneurs. Representatives of enterprises, research and development units, universities, regional government and business organisations from Poland, Finland and Denmark attended the meeting. During the round table the areas of smart specialization were assessed regarding the scale of impact on the regional economy, the methods and tools for implementing the RIS3 were discussed, as well as possible solutions which can improve their implementation and effectiveness. The cooperation between science and business was also evaluated and ideas and projects that could improve this cooperation were also identified. Conclusions from the meeting will be delivered to the Marshal's Office of the Lubelskie Voivodeship, responsible for the implementation of the RIS3.